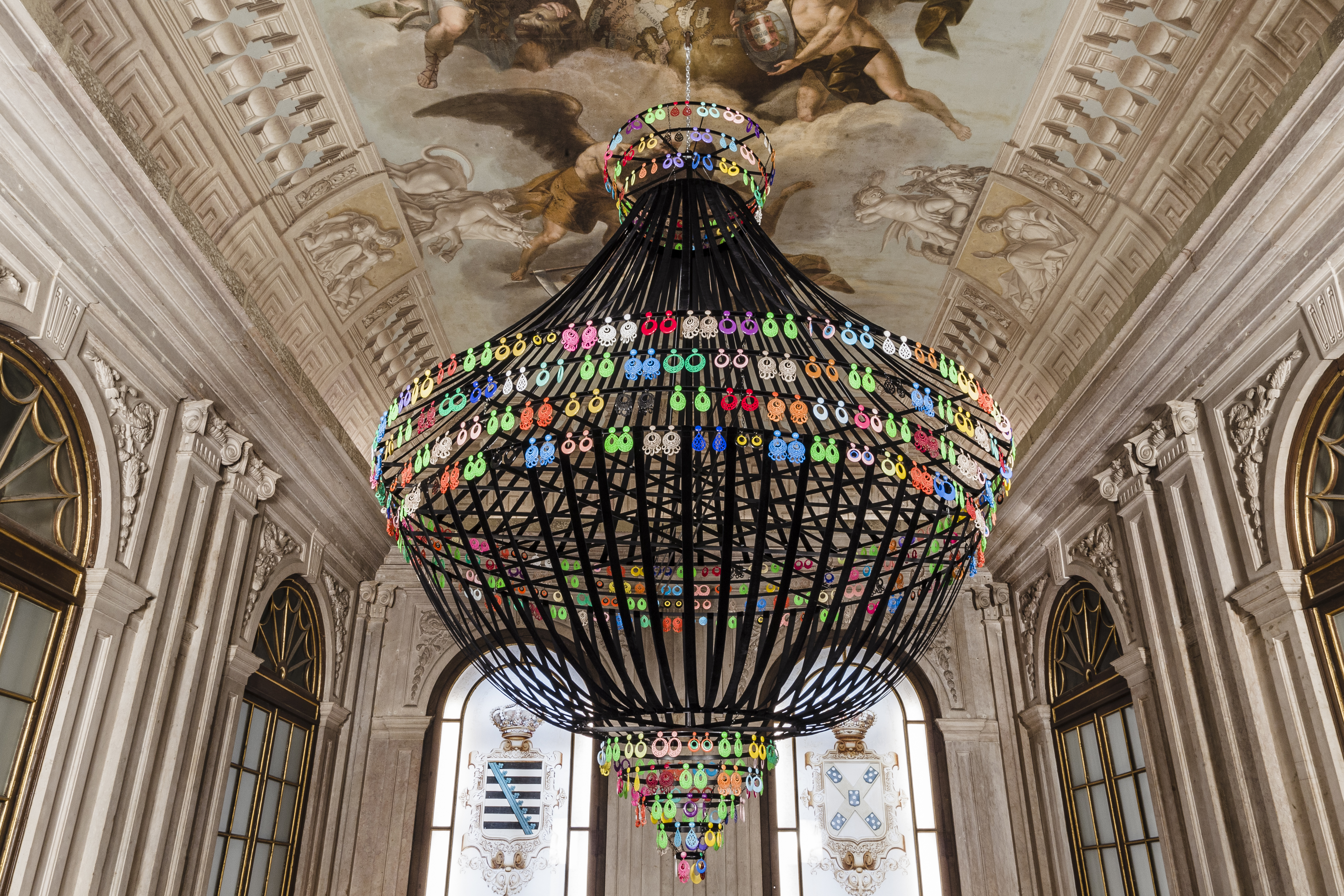 Hi DHG friends! The introduction to today’s artist is going to be shorter than usual, the reason being that this time, more than ever, there is not much that needs to be added to the pictures and to Joana Vasconcelos own words. I would describe Joana Vasconcelos with three words: eclectic, magnificent, and pop. Also, one should not underestimate the fact that Joana is a versatile artist who is able to share her ideas and her know-how with the younger generations, spurring them to nurture their creativity. Lastly, another distinctive feature of Joana Vasconcelos art is that it reveals some of the most critical aspects of our society, such as sexism and class discrimination, through her colossal works. Beauty to please the eyes and meditiation to feed the soul. Here is the interview! 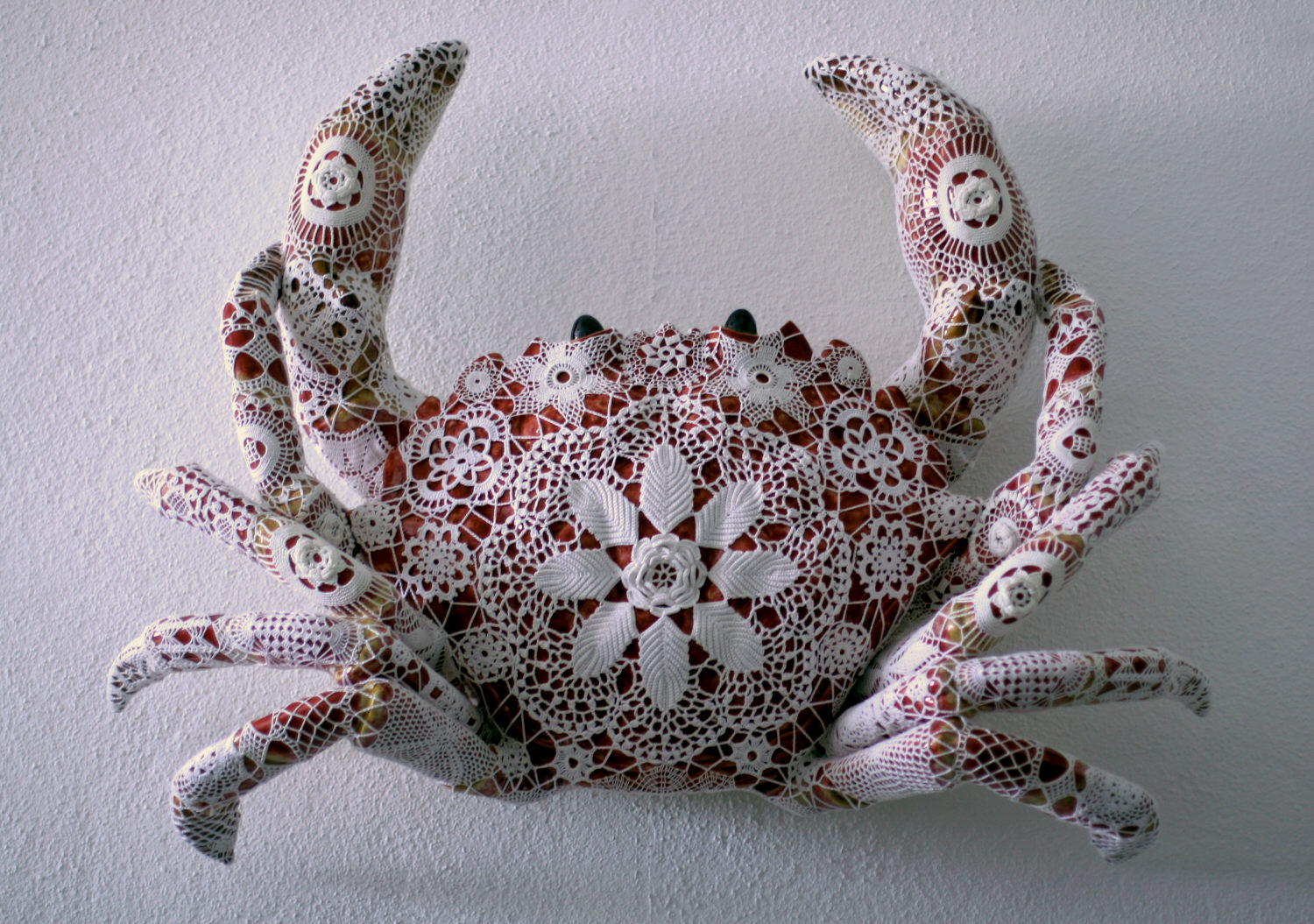 DHG: you were born in Paris, but now you live in Lisbon. Why this decision?
JOANA: my parents decided to return to Portugal  after the Revolution of April 25, 1974. They had been political exiles and I was two years old. So, it wasn’t much of a choice! However, the choice to continue in Portugal has to do with various factors. It’s my home, where I grew up, studied, first began developing my work. Here, due to the local economy, I am able to have a very large workspace that would be impossible in London or Paris. And I also have access to certain materials and ancestral techniques that are becoming extinct in most other parts of the world- which is very important to my work.  The circumstances also allow me to be independent, having created a team of around 50 employees. And being able to produce and supervise all the work. 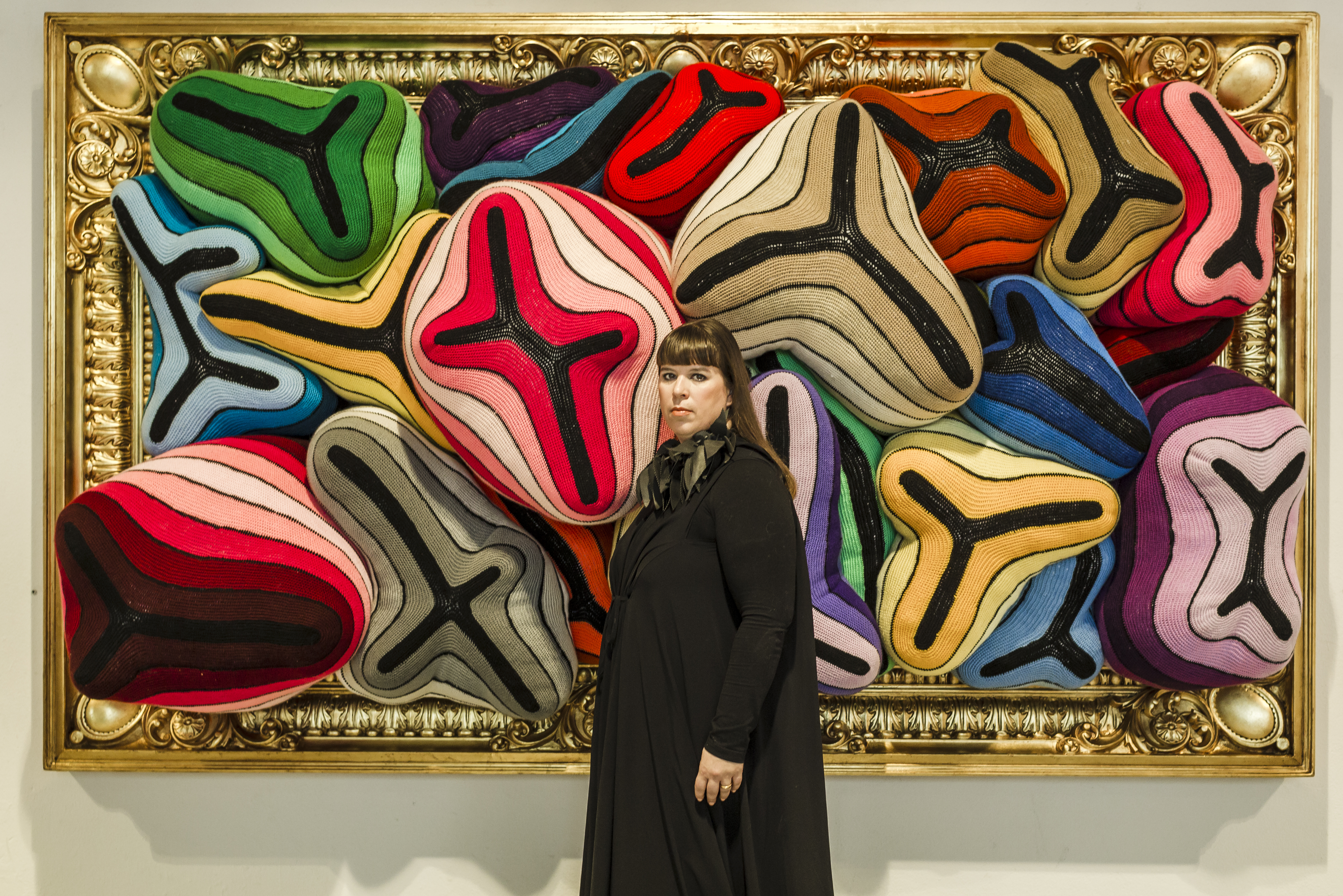 D: what does the cross with points of different colors, the symbol that is always next to your name, mean?
J: it really doesn’t mean anything in particular! It’s related to the shapes that I explored when I worked jewelry (my first studies were in this discipline). You can make a relation to the four elements. To the primary colours and especially to the colours of the Portuguese flag. Basically it serves as a trademark for my work and studio. 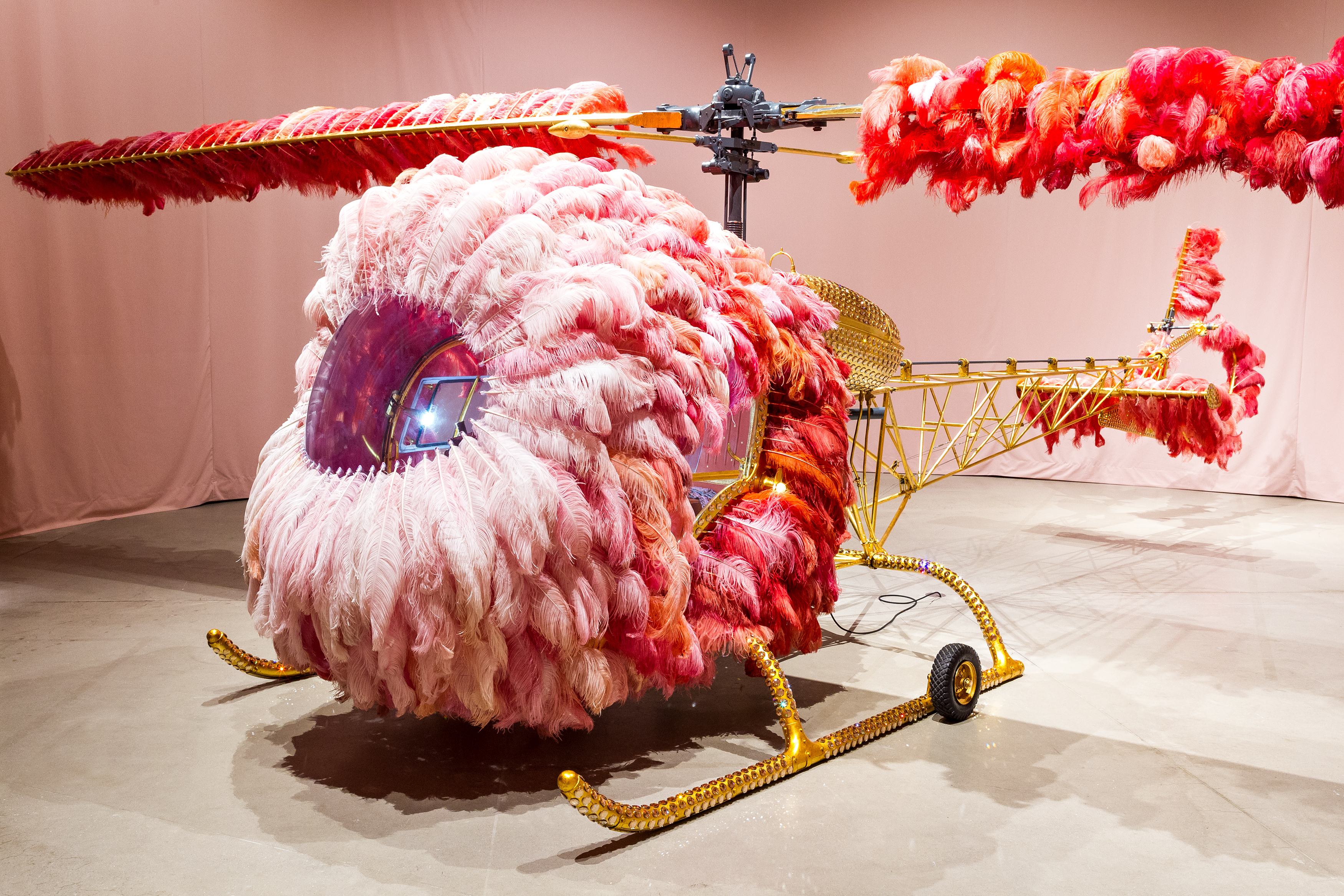 D:  first thing I noticed was the variety in the different means of expression and in the types of materials that you use. Why?
J: the means of expression and materials deal with conceptual matters. The idea that is meant to be developed and/or worked determines the medium and materials that will be applied. For example, with the piece Marilyn, the recourse to saucepans to build a pair of high-heeled sandals. Arose from the idea of working woman’s contemporary role in society. The saucepans and high-heeled sandals are paradigmatic symbols of Woman’s private and public dimensions. Proposing a revision of the Feminine. The use of saucepans, sign to which one would associate the traditional domestic sphere of Women, in order to reproduce an enormous high-heeled sandal. Symbol of  beauty demanded by social conventions. Contradicts the impossibility of the dichotomic relation of the Feminine in the domestic and social spheres. 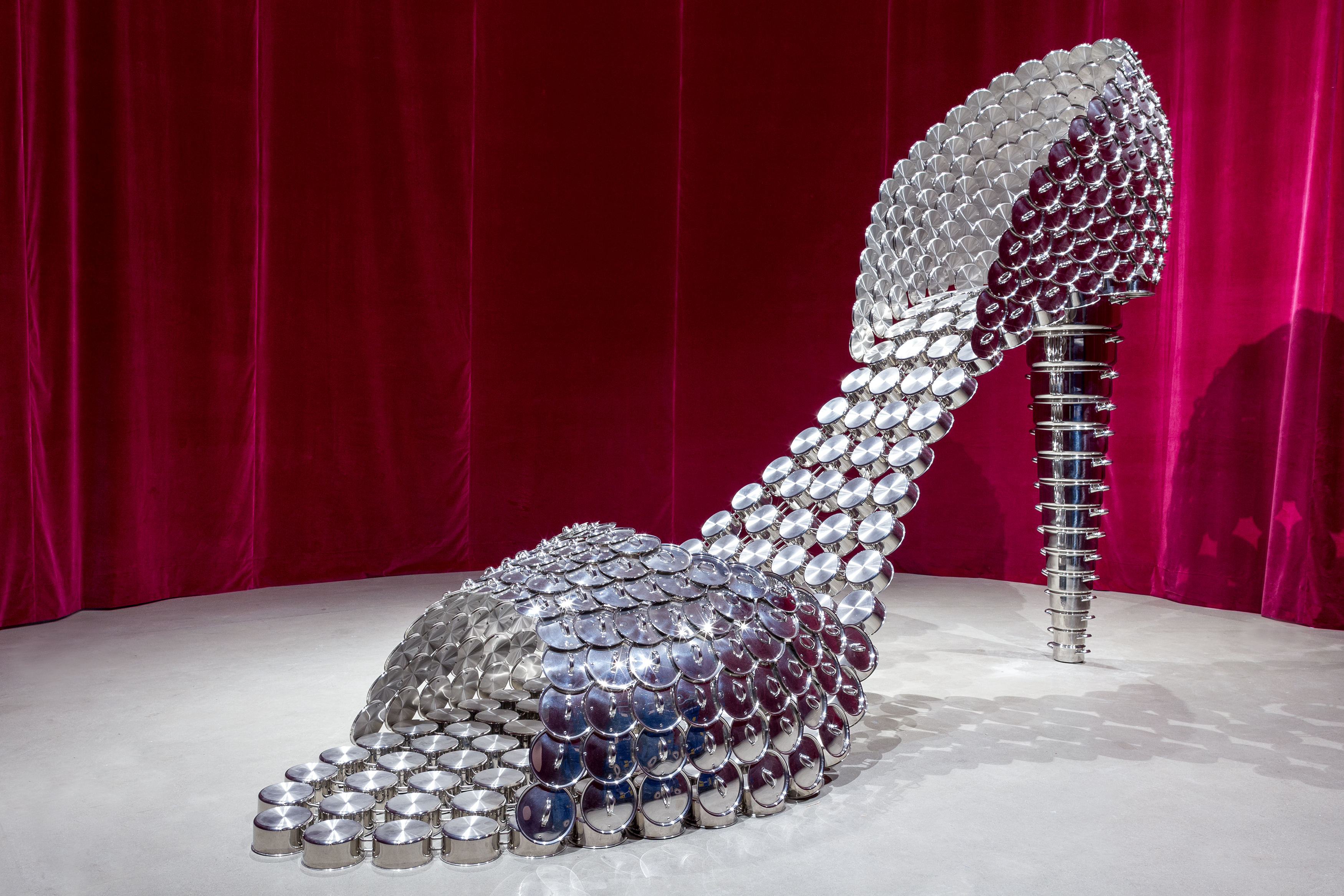 D: there must have been a moment in your artistic career in which you took a leap forward, going from being a locally known artist to an international one. When was that?
J: my work became known internationally after my participation in the 51st International Art Exhibition– la Biennale di Venezia in 2005. With the work The Bride [A Noiva] (2001-2005). I was only 33  and it was all quite scary but exhilarating at the same time. My work was at the entrance of the Arsenale exhibition, Always a Little Further. I suddenly found myself surrounded by dozens of journalists and photographers, shooting questions and photos. I wasn’t prepared at all for this surprise, and just worried about doing my best not to show off my nervousness. 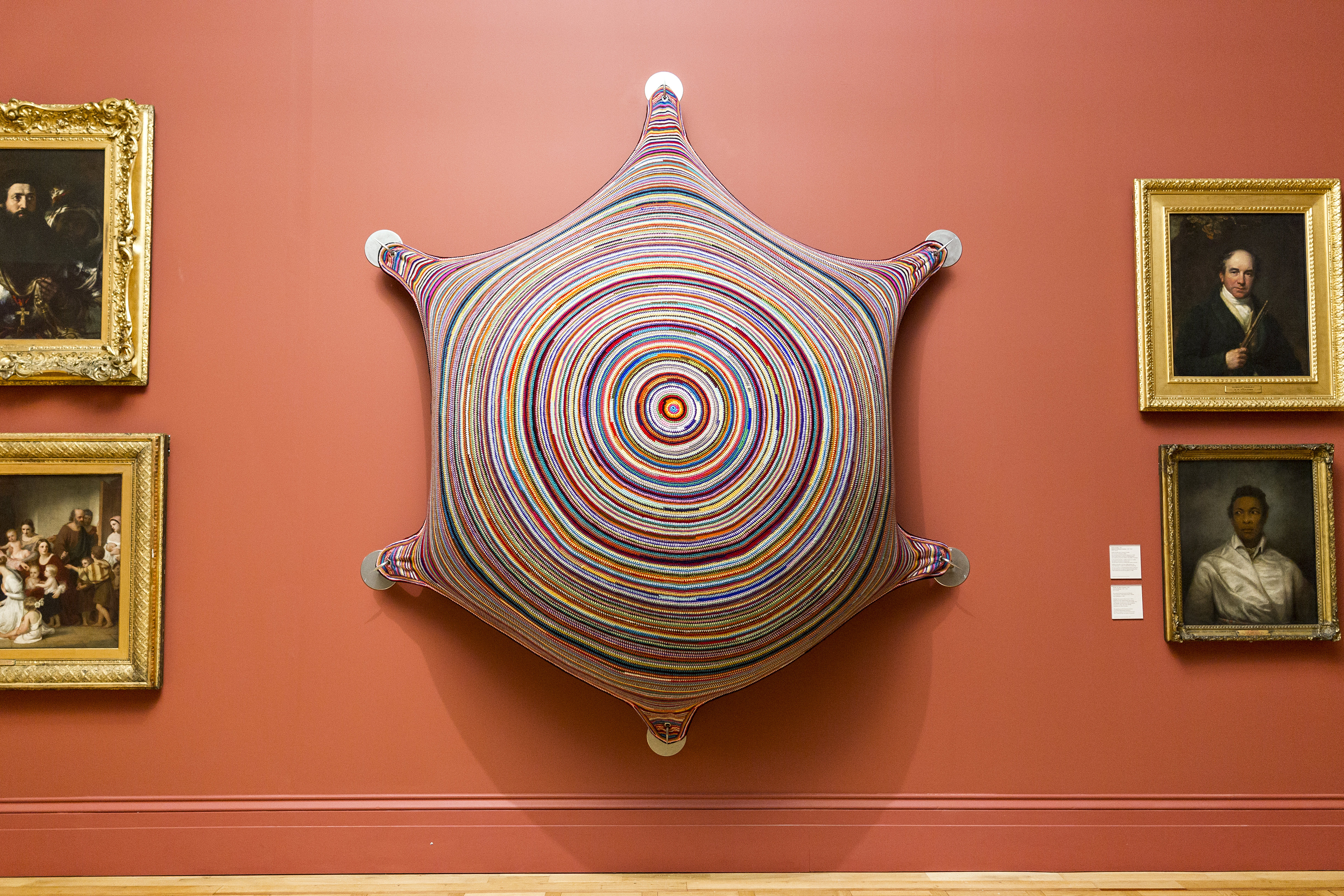 D: out of all your works, which is the one that more than any other you consider a manifesto of your artistic views?
J: A Noiva [The Bride] (2001-205) will forever remain one of my most cherished works for all that it represents. Something always happens every time this work is about to be shown. It marks the beginning of my internationalization, when I first participated in Venice in 2005. It has often – and recently – been censored – as it was the case at my show in Versailles, in 2012. It’s a piece that can still be uncomfortable to some as it exposes the imposition of a hypocritical and repressed feminine sexuality to a corrosive action of irony and ambiguity. When viewed from a distance, it’s an imposing chandelier displaying a cascade of glistening pendants. However, once you get closer, one is surprised by the fact that that which shines like glass or crystal, are actually thousands of immaculate tampons. The reflection of light upon the transparent wrappings is what results in this shine. That said, this work brings together some of the main characteristics of my artistic grammar and practice: the appropriation, decontextualisation and subversion of pre-existent objects and everyday realities; the materialization of concepts which challenge the pre-arranged routines of the quotidian; a complicit but at the same time critical vision of contemporary society and the several features which serve the enunciations of collective identity, especially those that concern the status of women, class distinction or national identity; and a speech which is attentive to contemporary idiosyncrasies, where the dichotomies of hand-crafted/industrial, private/public, tradition/modernity and popular culture/erudite culture are imbued with affinities that are apt to renovate the usual fluxes of signification which are characteristic of contemporaneity. 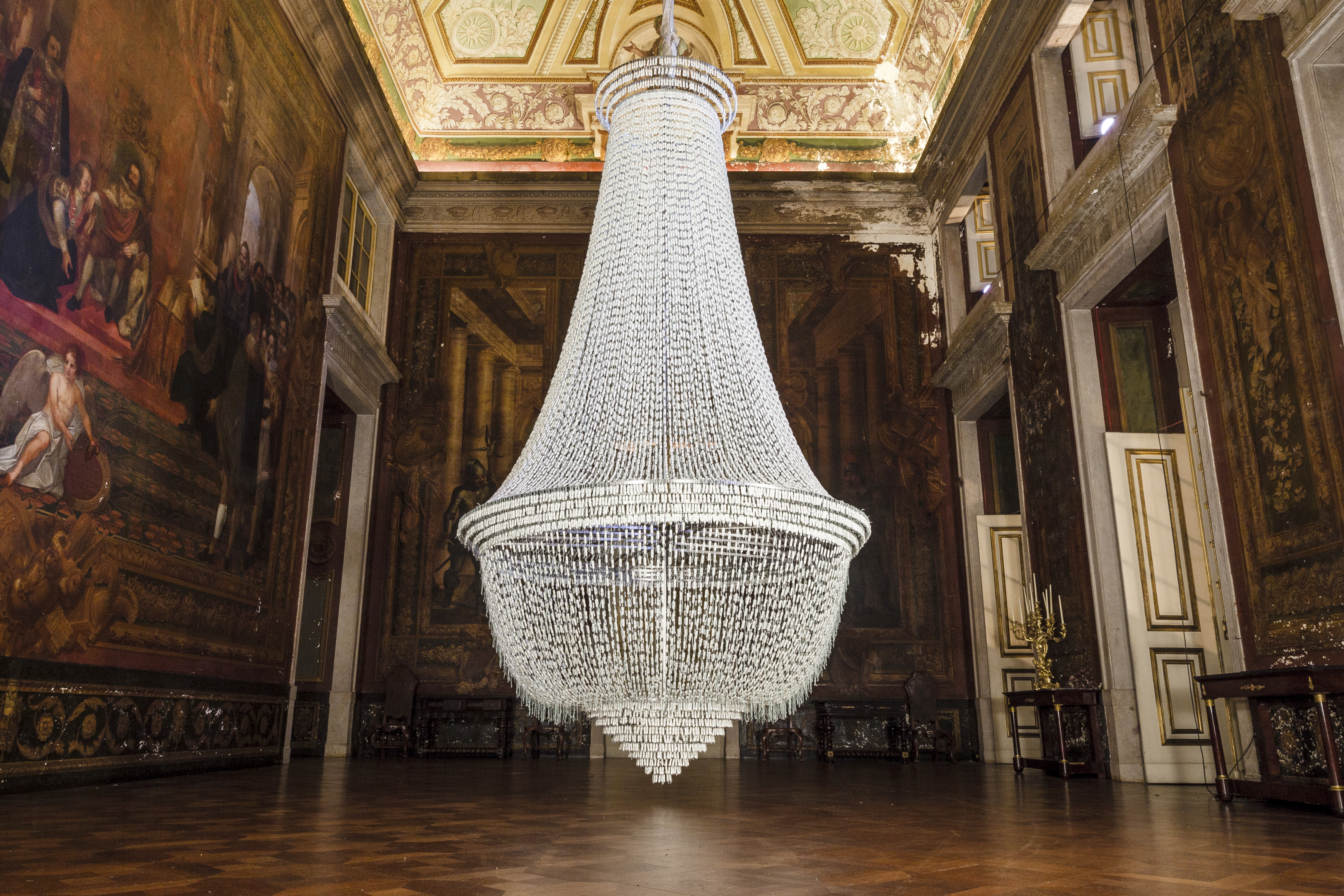 D: you took part in many editions of the Venice Biennale. Could you tell us something about what has changed in the artists’ styles in the past few years – if you noticed any changes of course.
J: artists’ styles are always different through the years and always changing. Because the themes and artists proposed by the curators change, thus, guiding and directing these changes. The curators are the ones responsible for bringing in new artists to represent the views that they wish to explore. 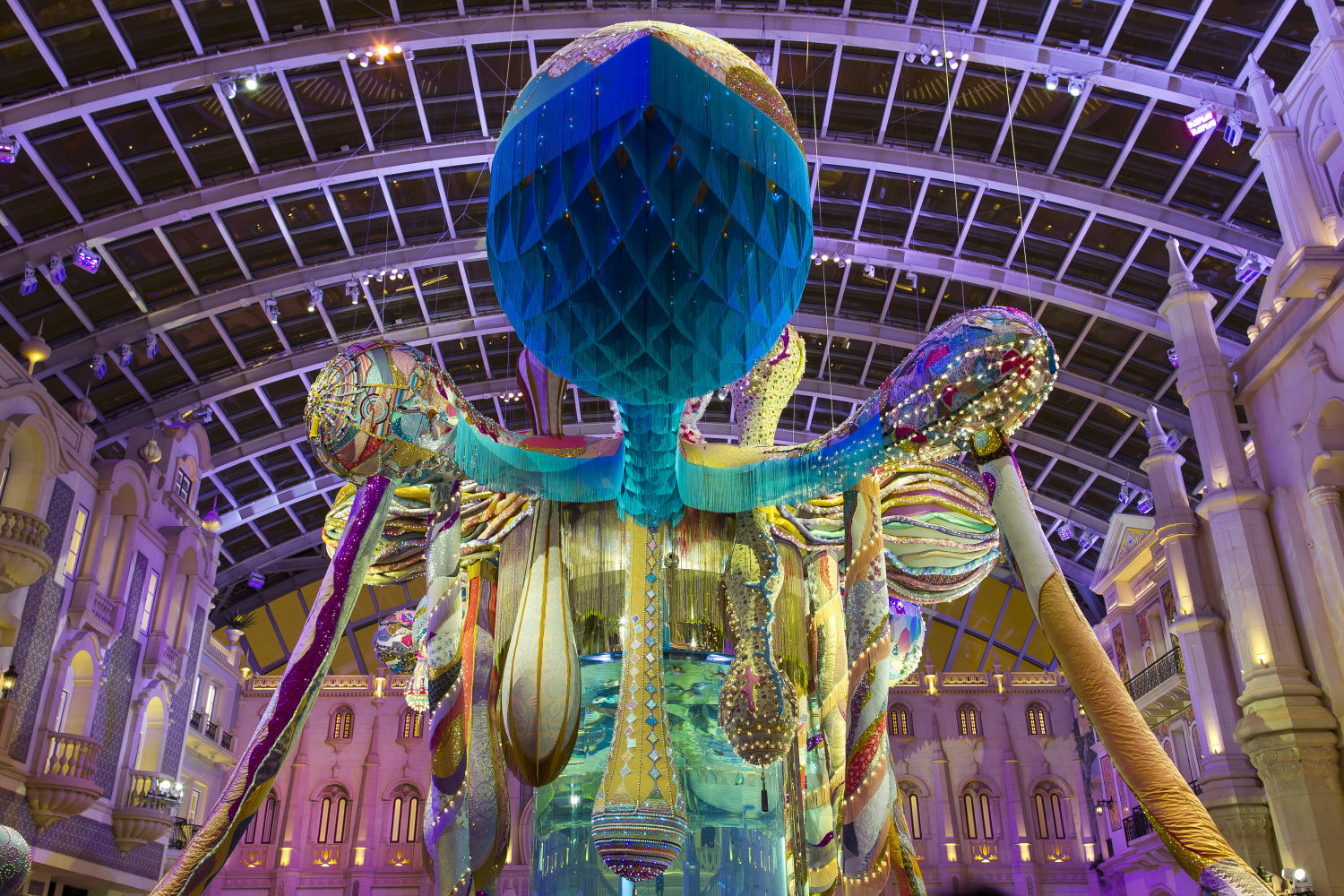 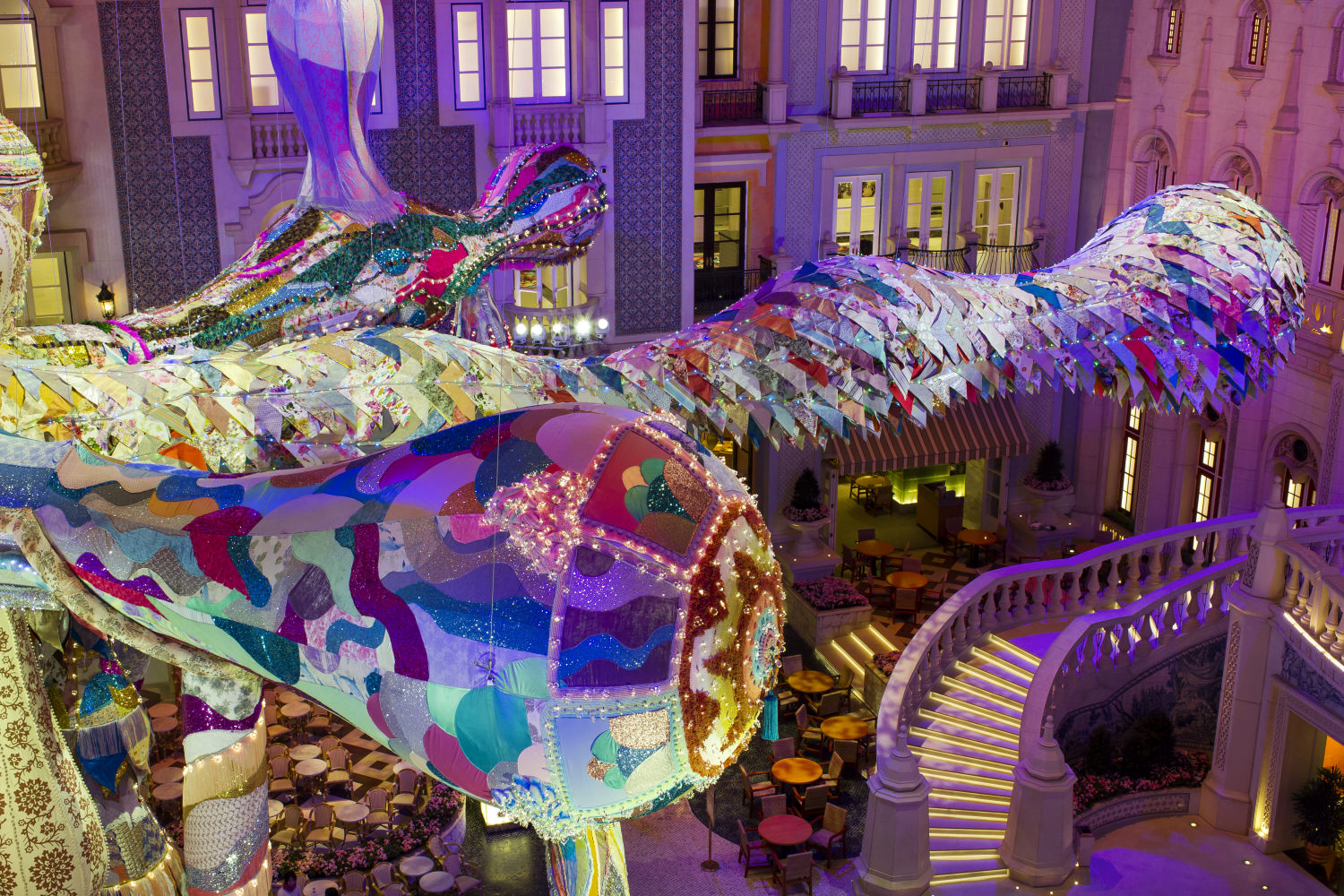