Doll clothes tutorial in 5 steps: Pollaz friends in the workshop

There are only a couple of things you’ll absolutely need for this project: a doll to dress, and 2mm thermoformable felt. Let’s start with the doll. Use your imagination to create this doll! It doesn’t have to be a person, it could also be a little animal. If you prefer, you can also use a doll that you have around the house. Maybe you can borrow one of your daughter’s doll 🙂 And now let’s move on to the clothes, the best part! 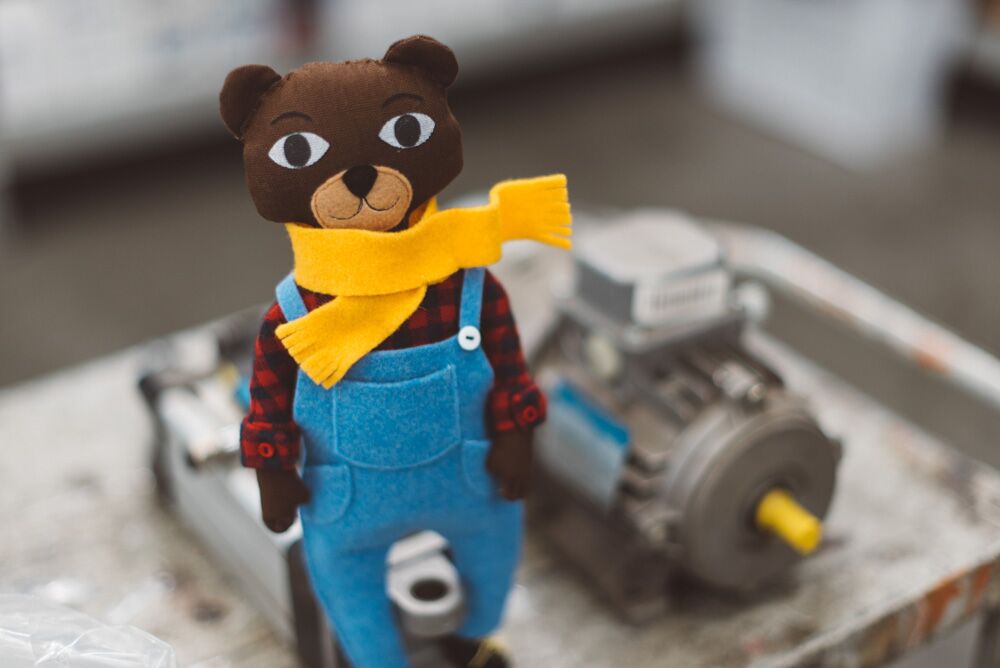 This little bear is wearing a flannel shirt, thermoformable felt overalls in Prince color, a Yolk color scarf, and Dark shoes. Take the measurements for your doll (a bear in this case) and draw the overalls on a piece of paper. The overalls need to have a longer part in the front, and a shorter one in the back, a pocket on the chest, 2 side pockets, 2 straps, and 2 little buttons. 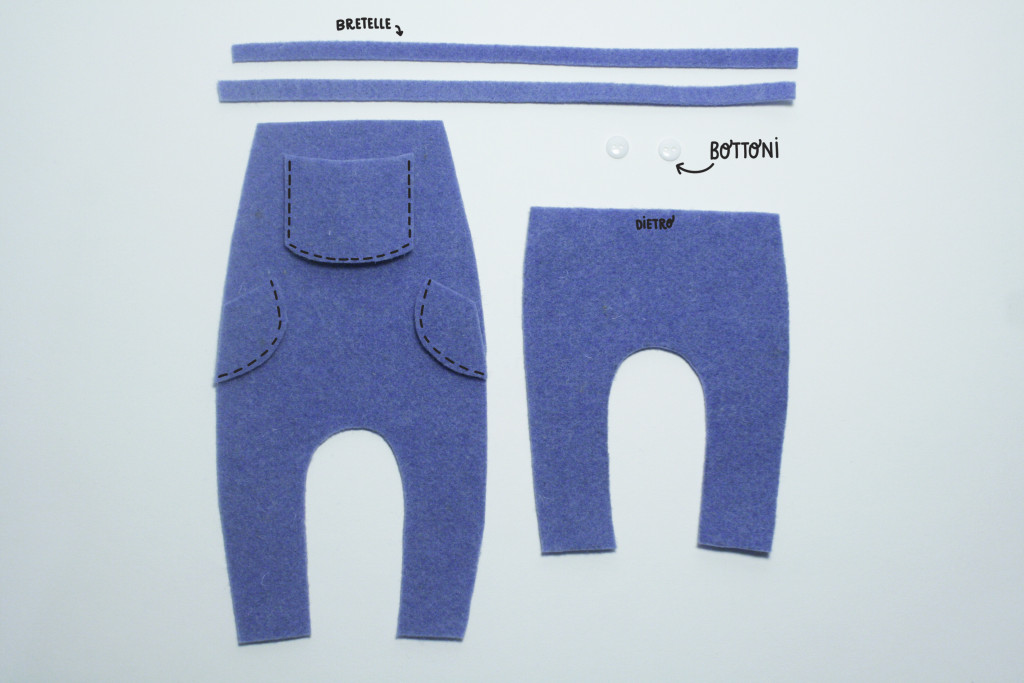 Now we have to sew the overalls together, and we will sew it directly on the doll. 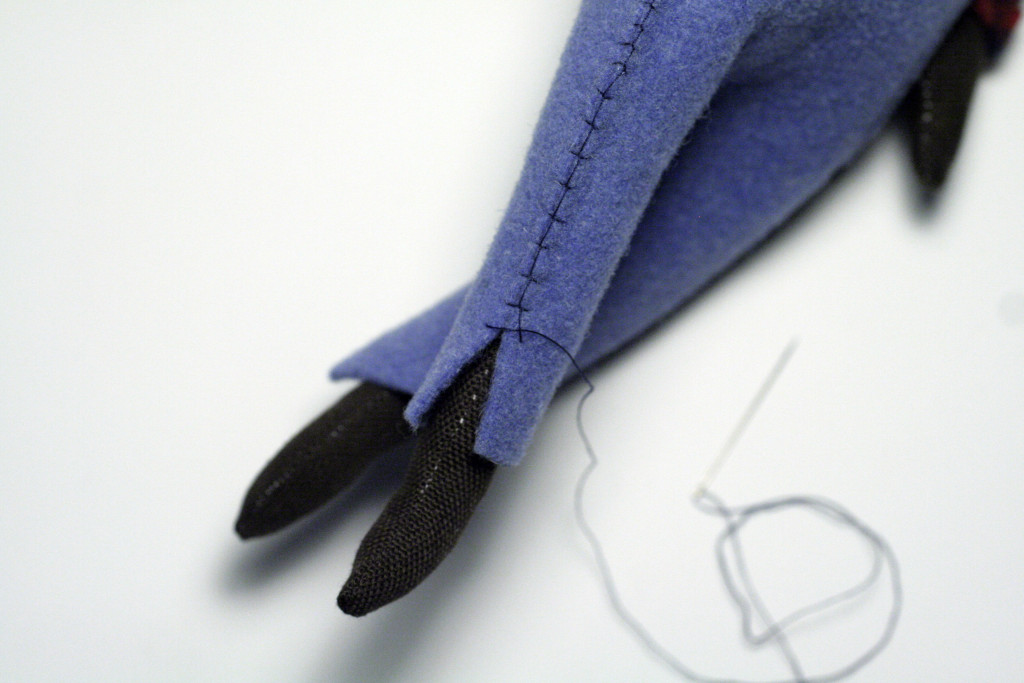 Don’t forget to cross them on the back. 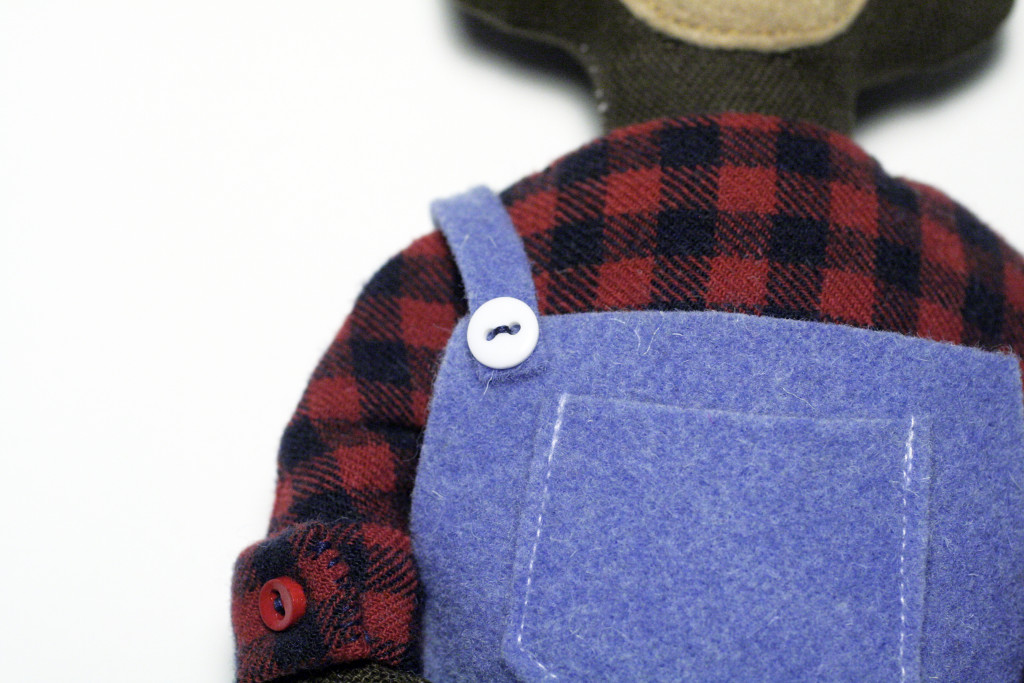 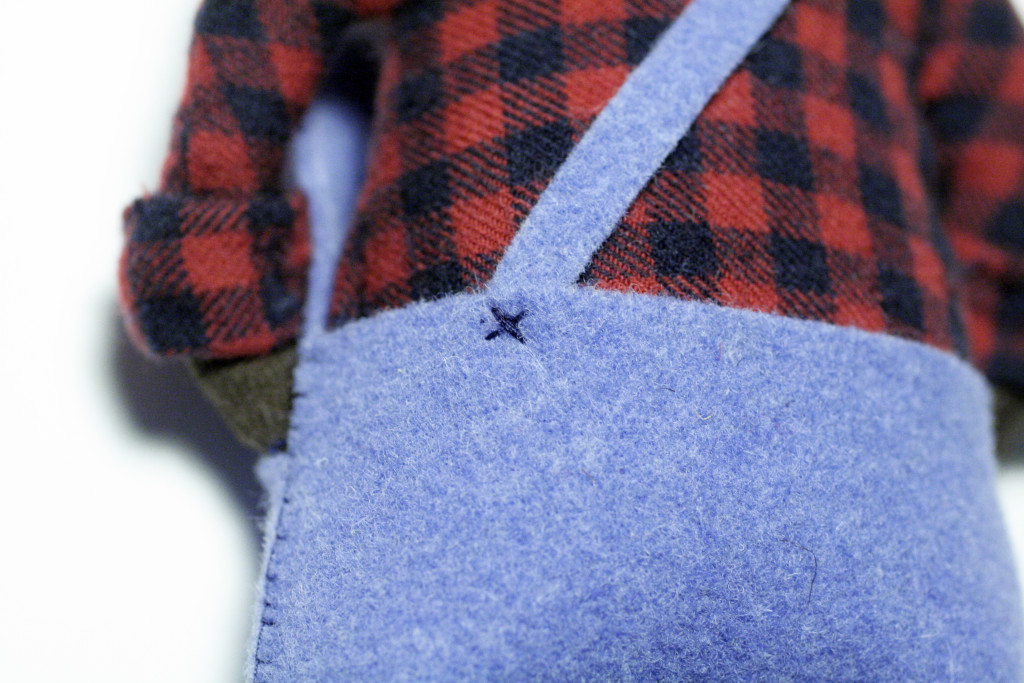 The shoes are very simple: 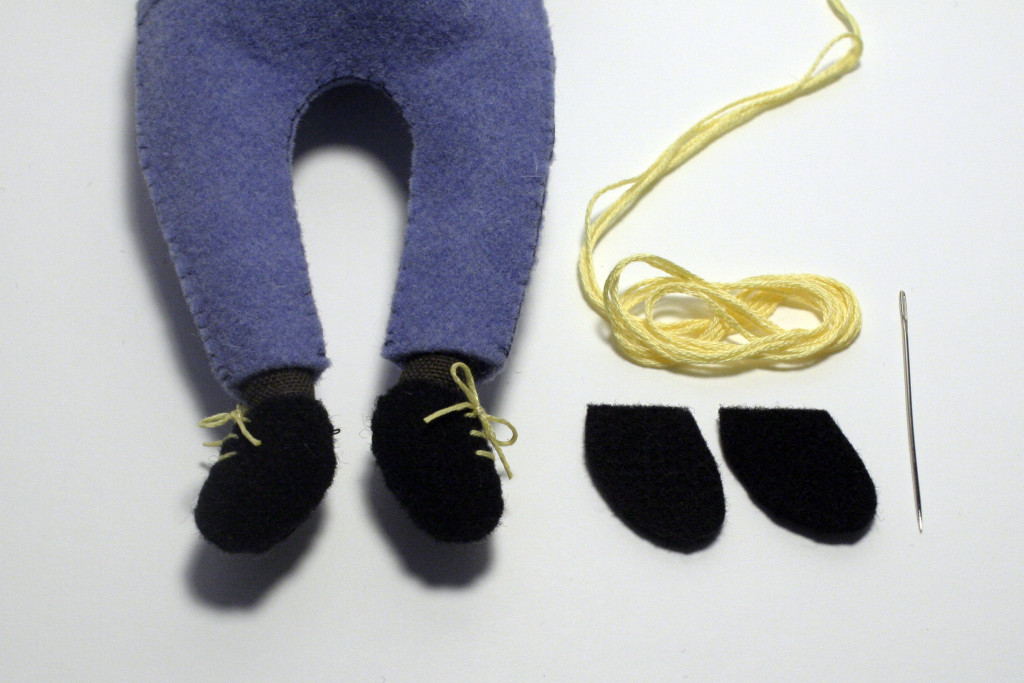 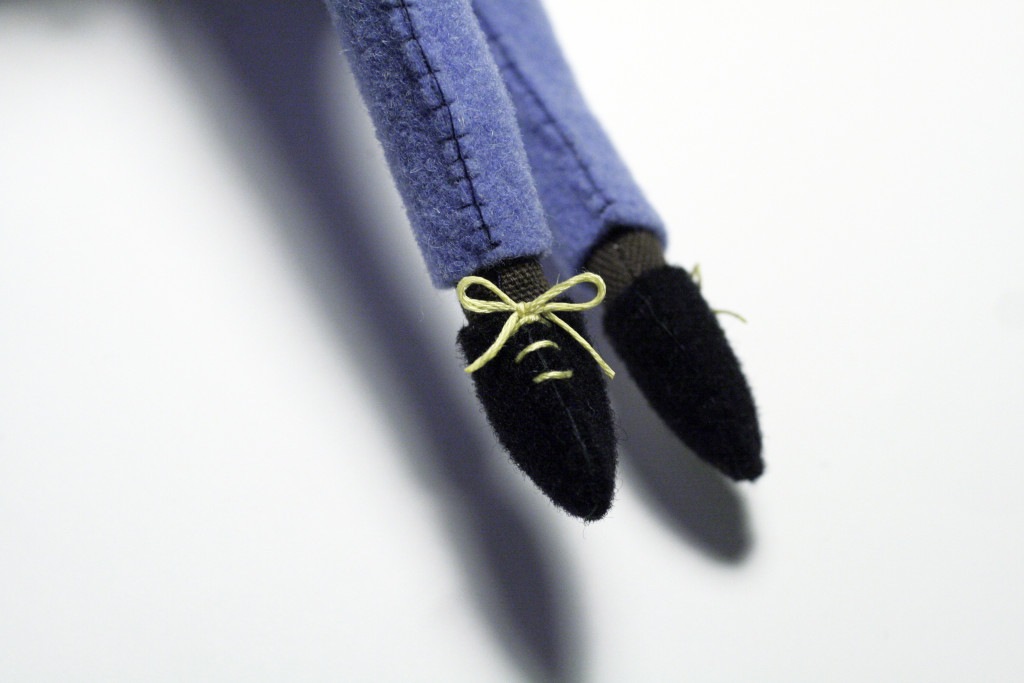 All that is left now is the scarf! 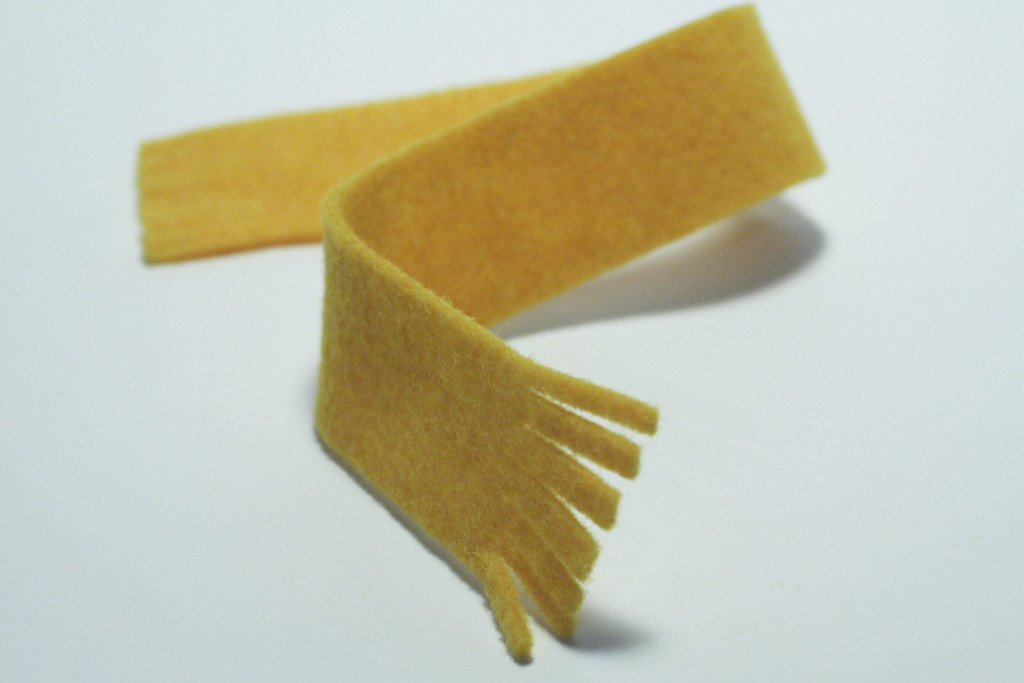 The fun thing about thermoformable felt is that the felt is going to keep the shape you’ll give it while cooking. This is perfect to give a movement effect to our scarf, as if it fluttered in the wind.

Use a piece of thin cardboard and some pins to cut out a scarf. Put it onto a pan and then into the oven at 130°C for 15 minutes (remember, use an electric oven, if you prefer to use the microwave, do not use the pins!). 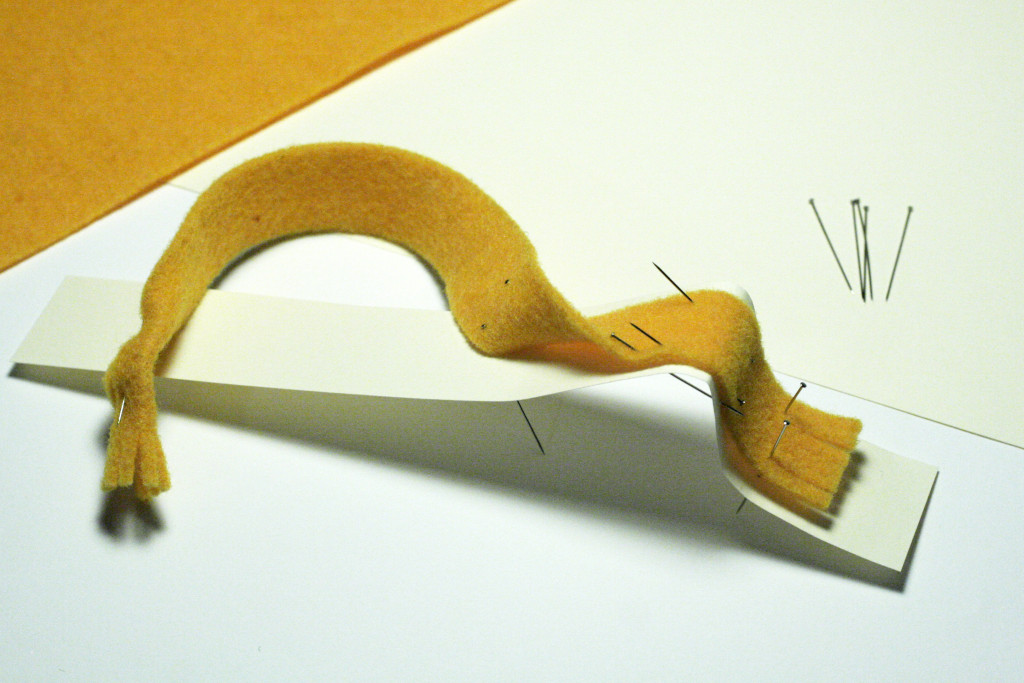 After cooking it for 15 minutes, let the felt cool off (a few seconds should be enough) and take out the pins. Josè is now ready to face any storm, whether it be a rainstorm or emotional turmoil! 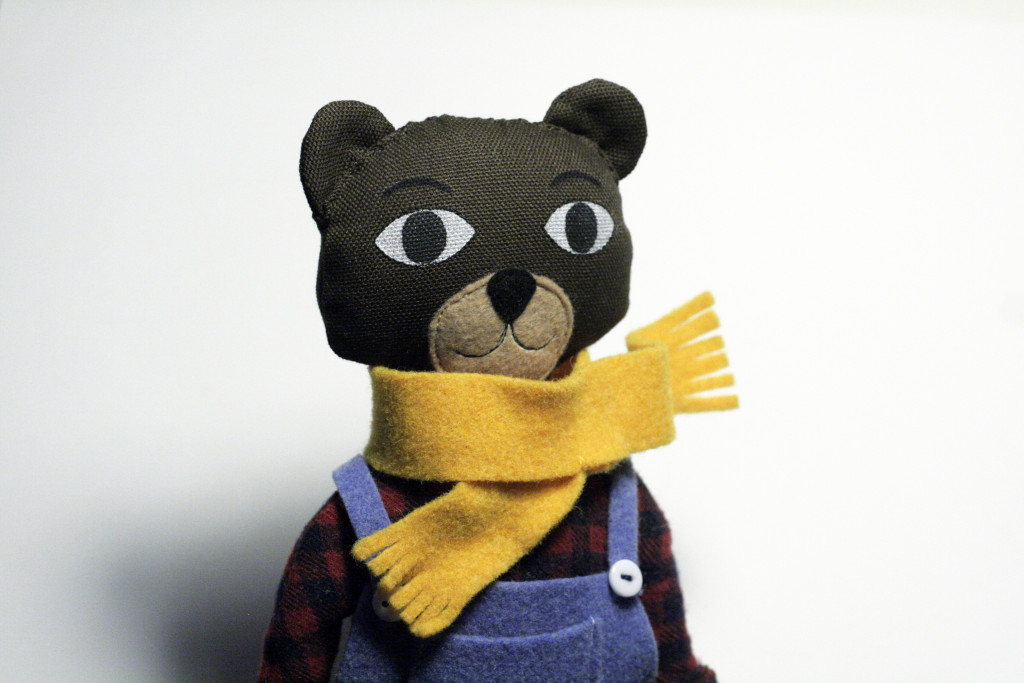 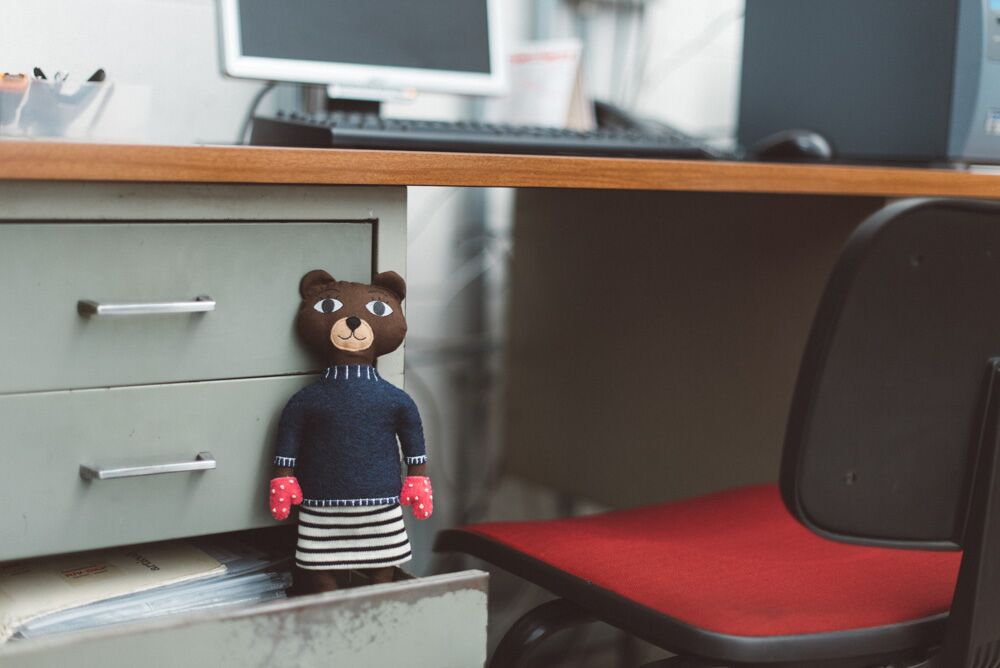 Our bear doll is wearing a wool skirt, a thermoformable felt sweater in the Tuareg color, felt boot in the Cinnamon color, and felt gloves in the Prince color. To make the skirt, just sew a tube using some woolen fabric. To make the sweater, follow these steps. 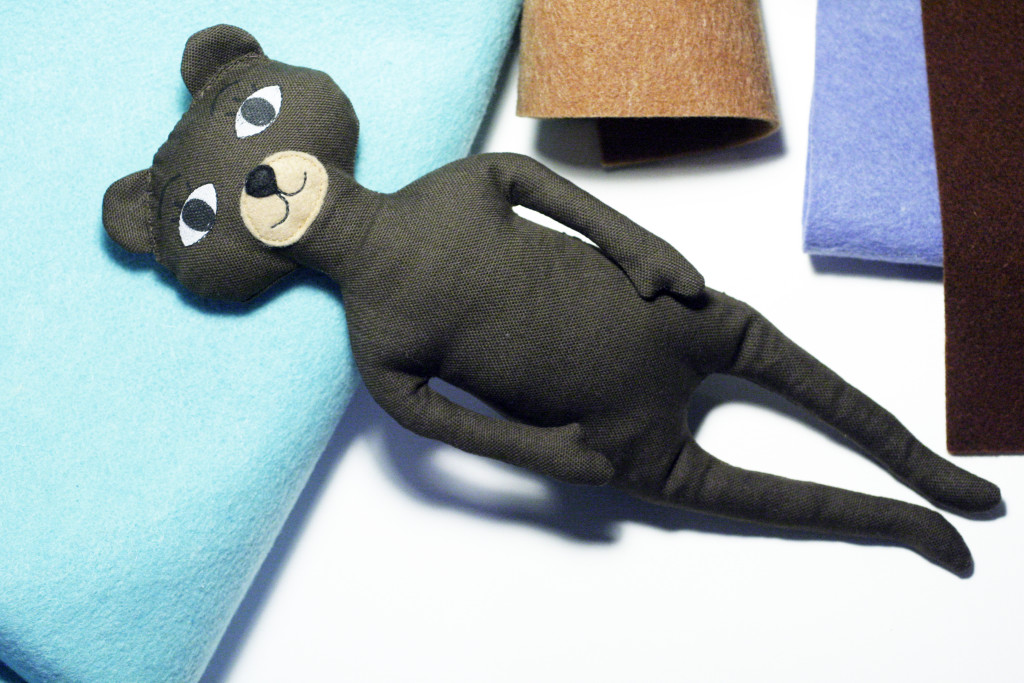 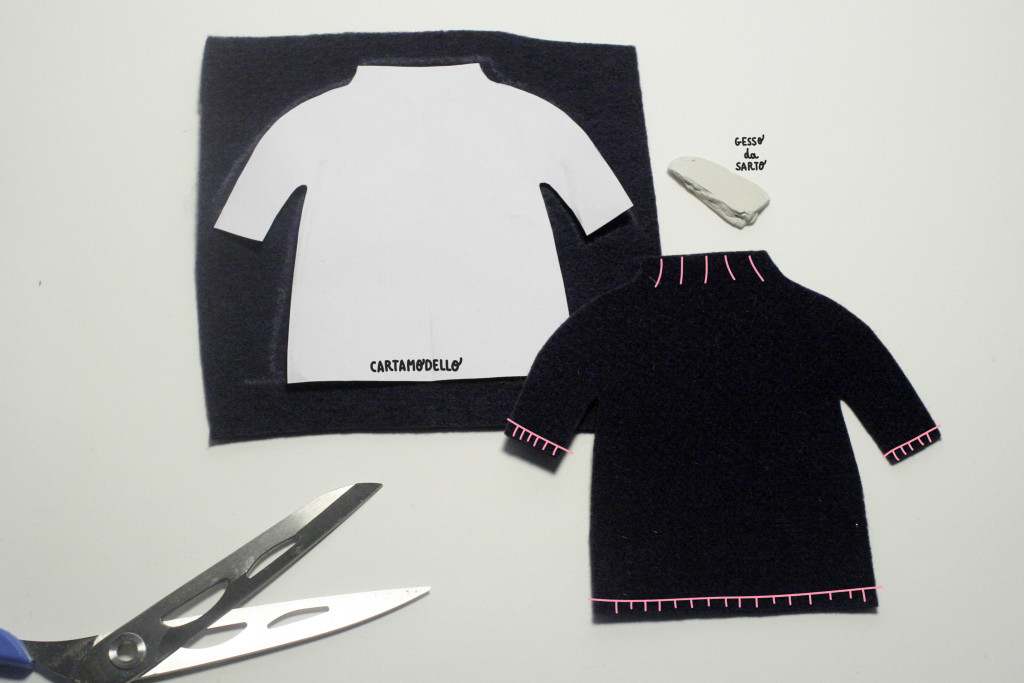 Now, sew the two parts on the bear, like we did with José’s overalls and the little shoes in blanket stitch. Susy’s paws are cold, so we need to make her gloves, using the same technique:

To make it cuter, embroider some polka dots on the back using French stitch. 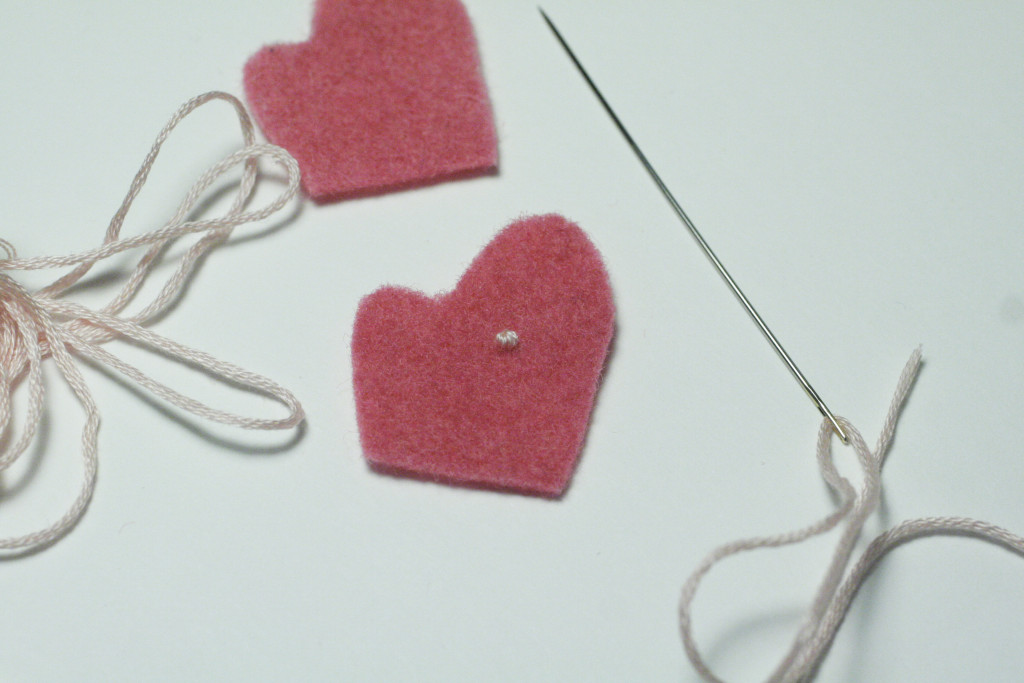 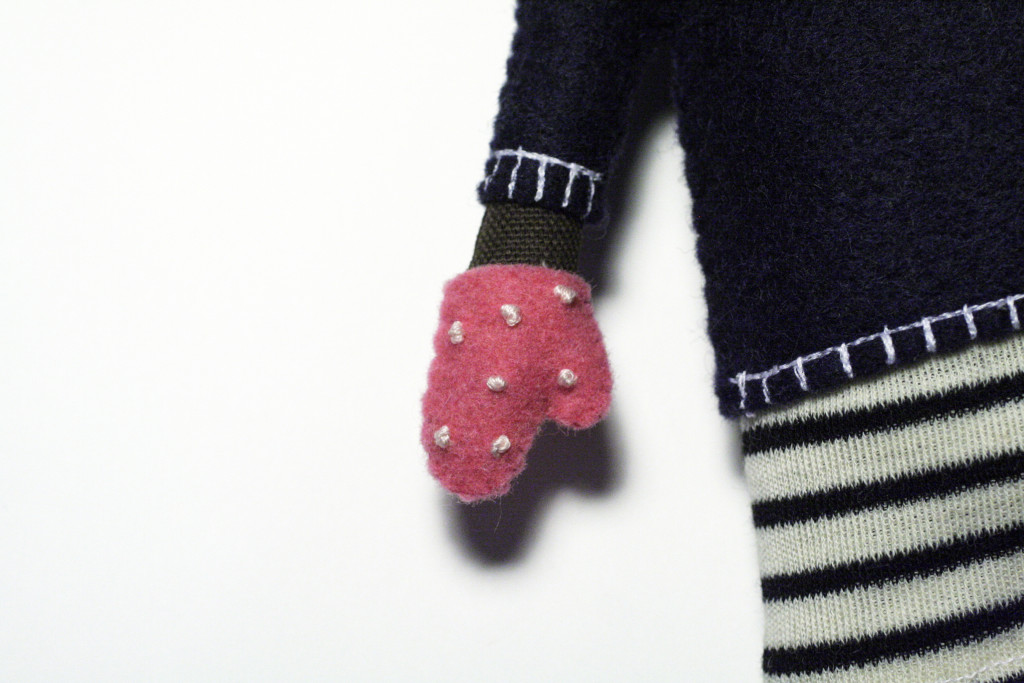 For the boots, I used some thermoformable felt in Cinnamon color and some pink embroidery yarn, matching the gloves. 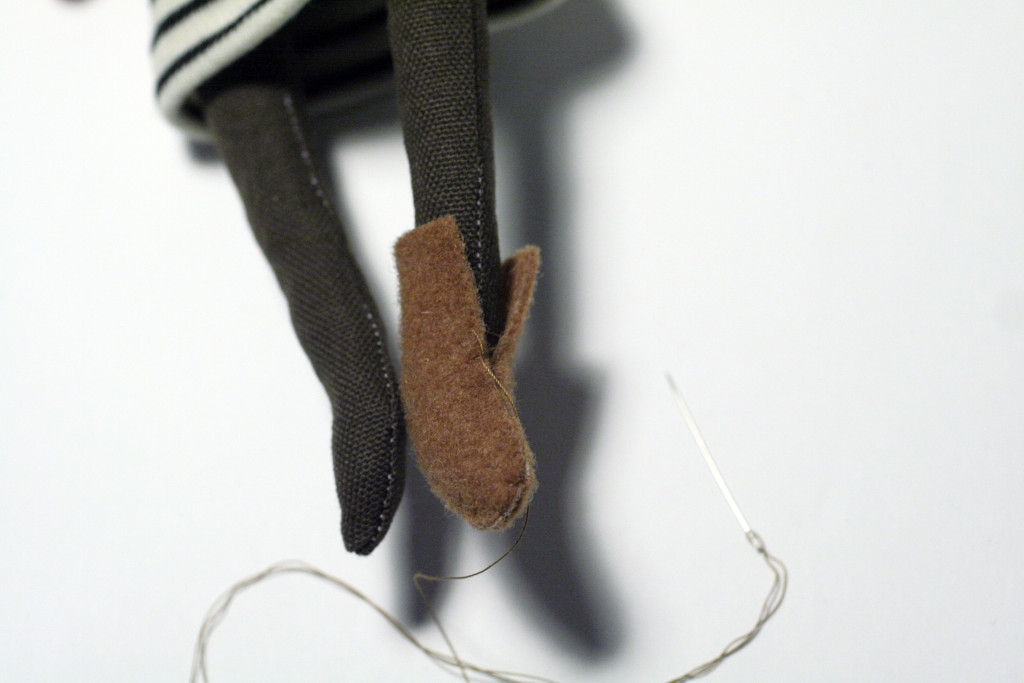 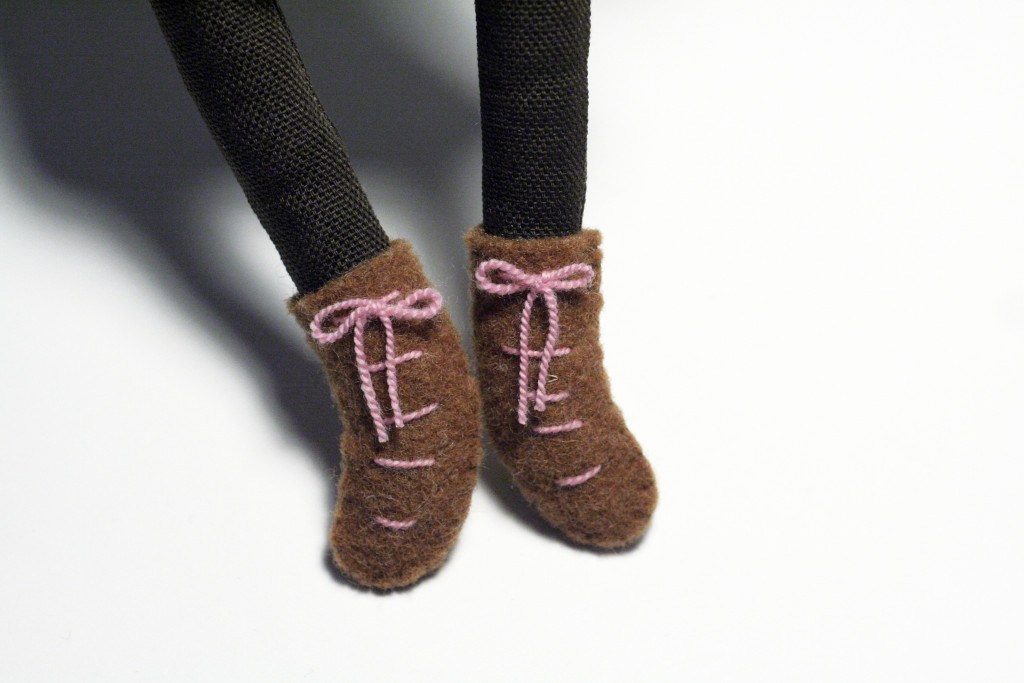 Susy is all dressed up and ready for another day of office work, phone calls and daydreaming! 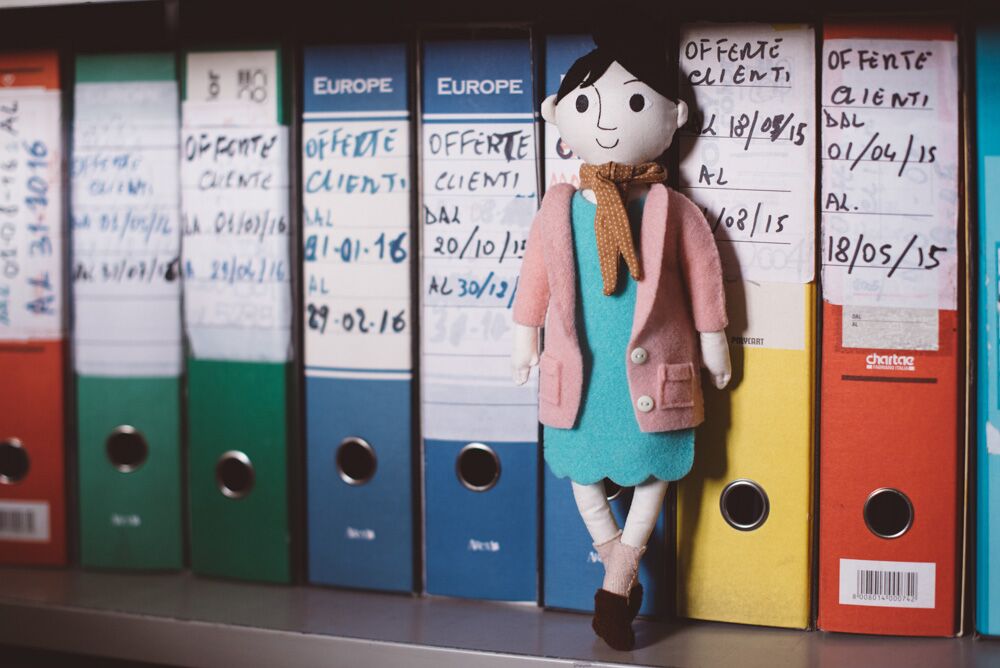 The doll is wearing a thermoformable felt dress in Antille green color, a wonderful coat in Powder  color, and boots in Morocco color. Let’s start from the green dress. It’s a very easy one. All you need to do is cut out two identical pieces of thermoformable felt, and sew them together in blanket stitch, leaving the arms out. The dress is sleeveless so sew it up on the shoulder. 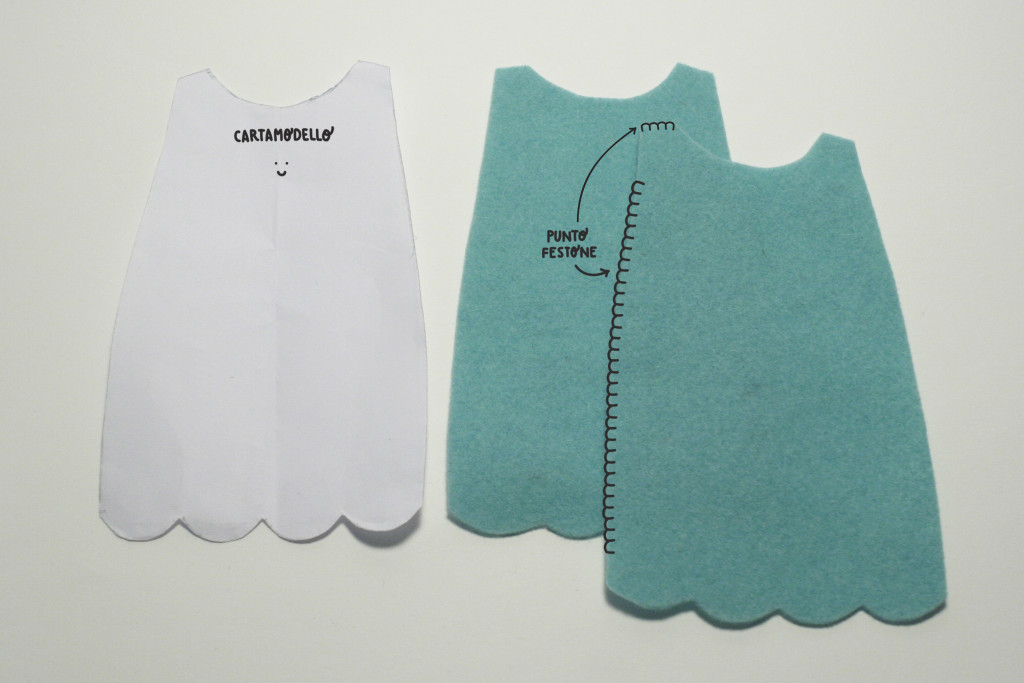 Now move on to the pink coat. Use the measuring tape to take the measurements of the doll. 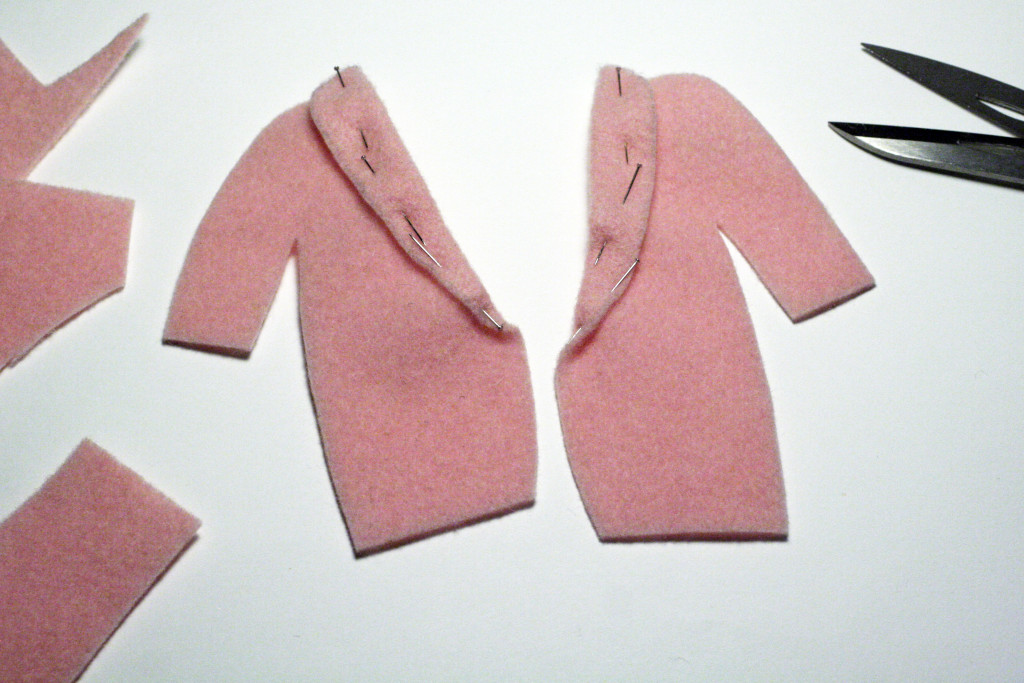 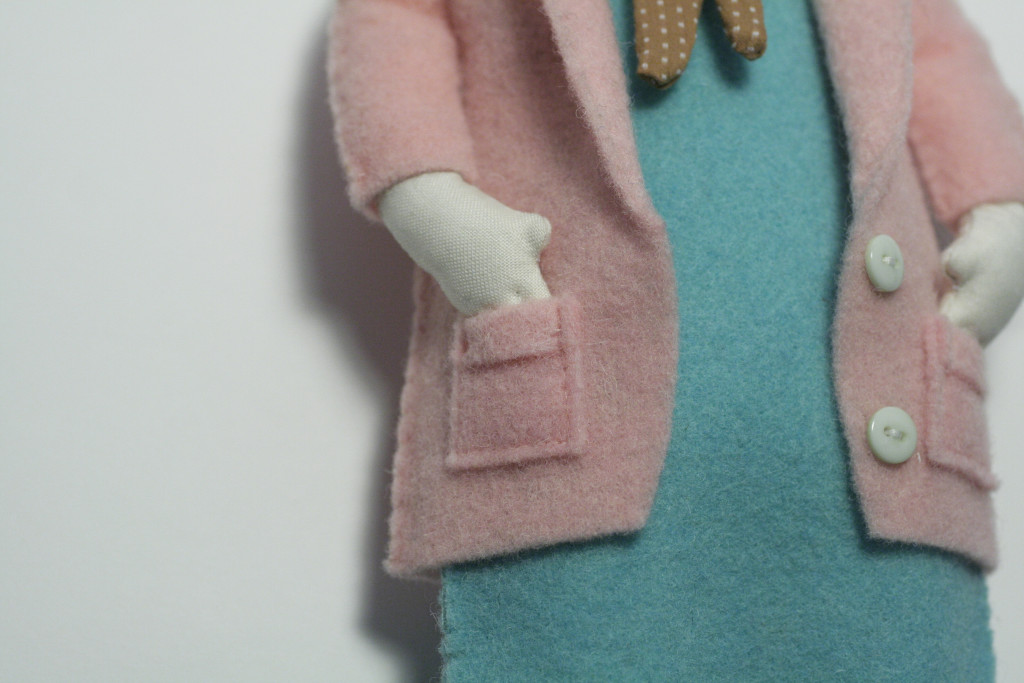 I decided to add a polka dotted cotton scarf, and some light pink socks. 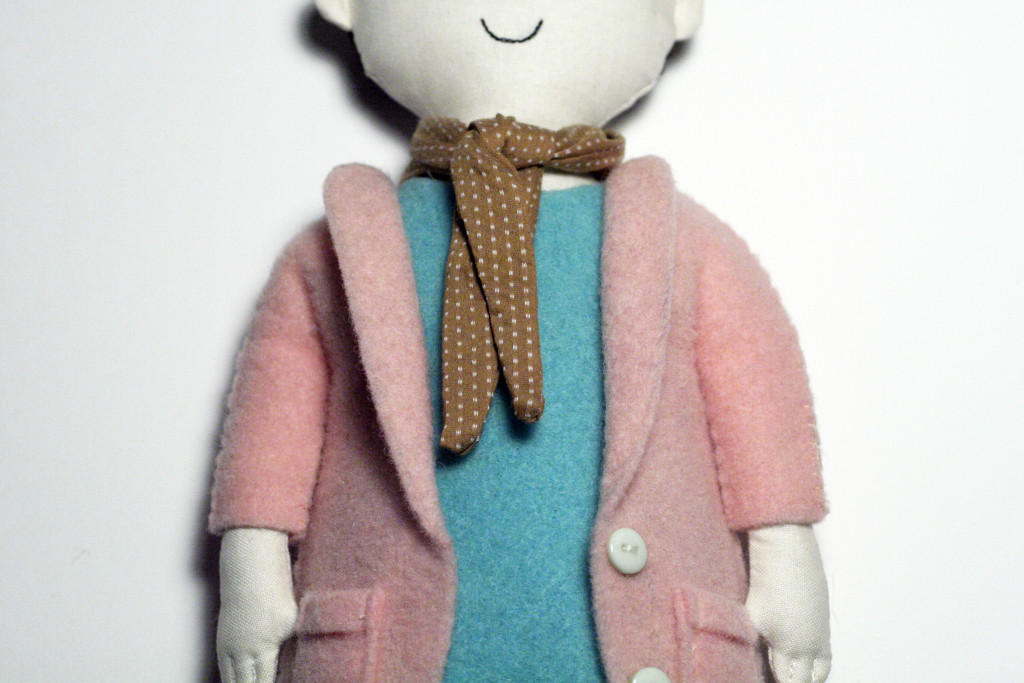 This time, the shoes have no laces, but have been sewn together up to the top, leaving the last part unsewn. 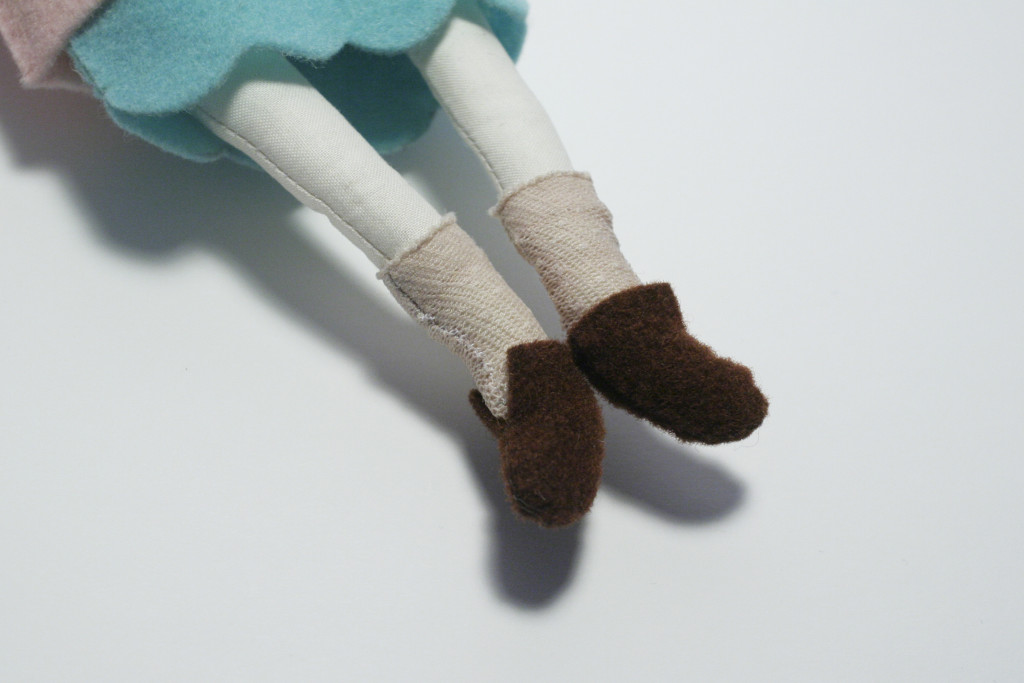 Ta-da! This is the whole team! Aren’t they super cute? 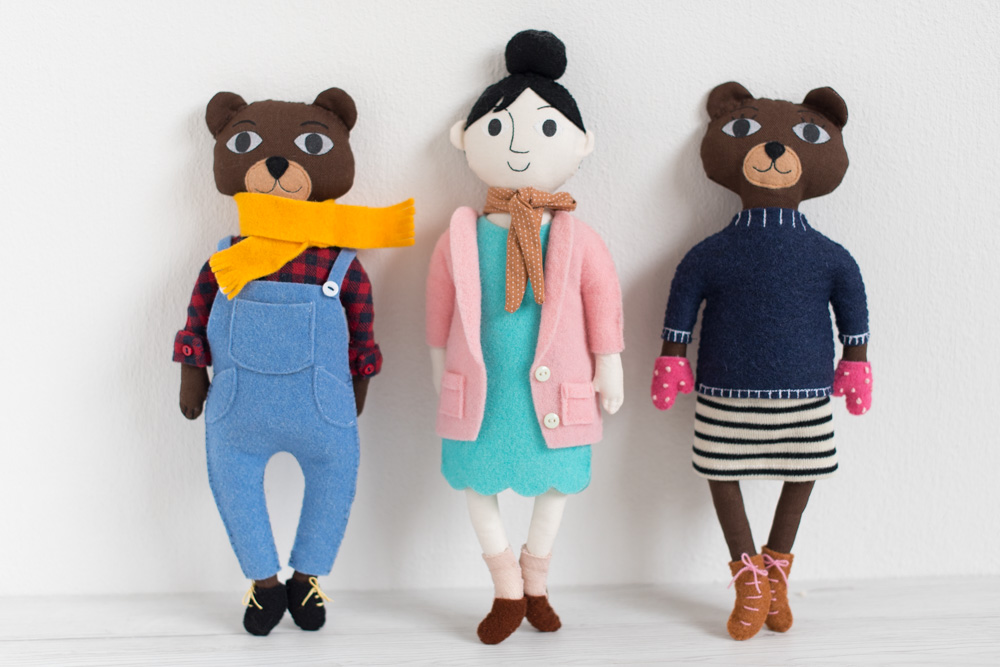